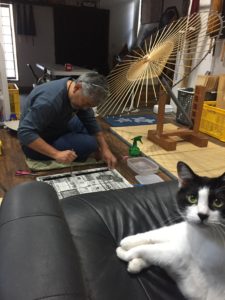 Hidenori Sugizaki, born in 1968 in Odawara, Japan, received his MBA and joined the civil service in the city office in Kanagawa Prefecture, where he worked for 16 years. Dissatisfied with the life of a typical ‘salaryman’ and concerned with the loss of Japanese craftsmen in all traditional arts, he began looking for an art he could study, with an eye to reviving the art’s popularity in Japan. After a trip to historic Kanazawa City where he met an 80-year-old master wagasa craftsman, Hide decided to pursue umbrella-making. Quitting his secure career, he traveled around Japan, studying construction techniques and making connections with the remaining artisans before opening his own shop in his home city, Chigasaki, where he resides with his wife, Kaoru, and two cats, Leilani and Magari. At the urging of his friends from Hawaii, Hide expanded his online presence to include these English pages and is keen to see the art of Japanese umbrellas spread far beyond his native shores.